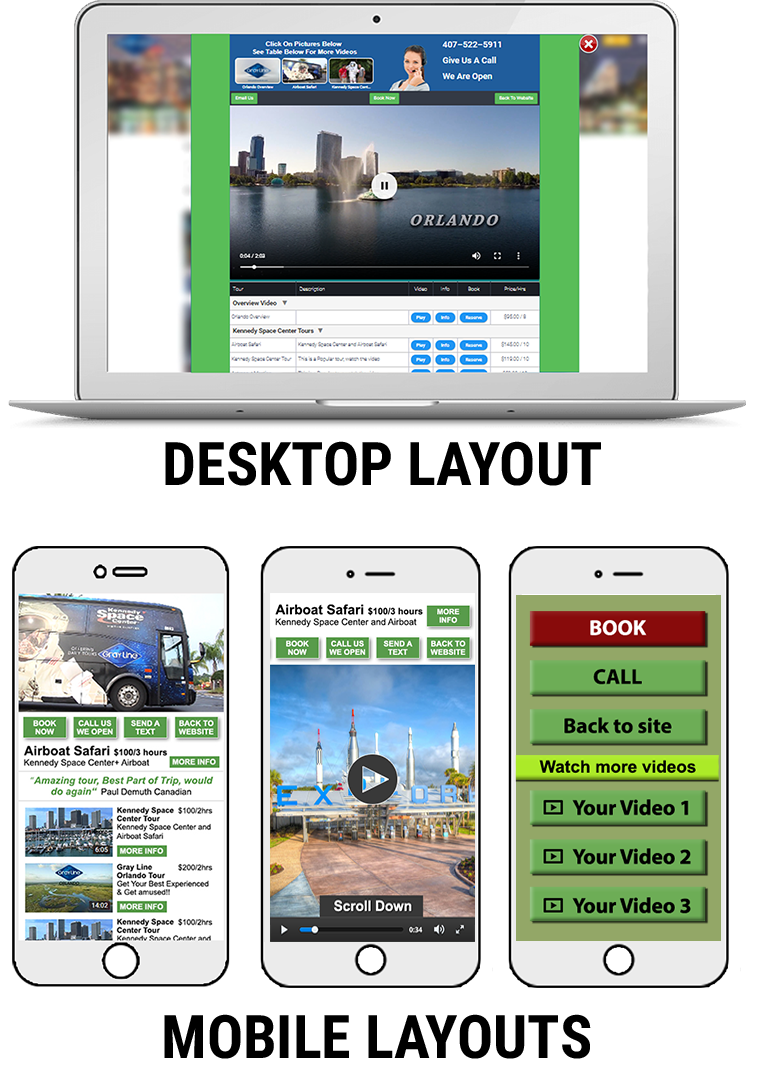 - One Touch Menu Increase Awareness & Simplifies Sales Funnel: Calling, Booking Meeting, Texting etc.
For the mobile users the Intelligent video player displays a
One-Click Menu during and at the end of the video.

- Consumers prefer Texting over calling and emaill. By displaying a Text Button all the time customers connect via texting more often.

- Add Personalized Video Call to Actions at the end of the video. If viewers are advised to book & call or text they will do it more often.

Email Tracking: Tracking when and how often they watch the video. This gives great insight to which clients are more active and how to customize your video.

Retargeting Advertising: After they finish watching videos in the intelligent Video Player and prospect goes off the internet to sites with ads such as news, music etc they see ads and or other listings for your company.

One-Touch Menu reduces the number of clicks to just one to call, text, watch,and book a meeting. A menu displays call, text, watch, book meeting during, and at the end of the video. By displaying these buttons during the video presentation it gets the viewers thinking about calling, texting, and when the video ends it display ending Ending One-touch menu.

-Allow Viewers to Text directly from the video.
Consumers prefer Texting so the Video Player displays the “Text” Button during and end of the Video as part of the one-touch menu.
-73 of consumers wish businesses would text them
-96% of consumer find phone calls disruptive.

Add Short - Video Call To Action
At the end of the video, you shoot a short Call To Action video of the Realtor saying. Thanks for watching should you have any questions click the call or text button to be instantly connected to you or book a meeting. When the Call To Action video ends the Intelligent Video Player displays the Ending One Touch Menu which has the one-click buttons to call or text or book a meeting. If you want the viewer to call or text you by telling them to do so with a short Call to Action Video it has proven to increase customers' engagement.

get viewers watching and engaging

- 74% of all video played on the internet is mobile and 94% hold the phone vertical making this the most popular video format. Our Video Player is the only Player which gets your video playing Vertical, which multiple surveys show this conpell viewers to watch and engage more often.


Stop let Youtube Steal your Customer, nothing free in life

This Intelligent Video Player was solely designed to get the viewers to click the “book it” and “call” button. Did you know that if you use YouTube for video playback on your website, YouTube steals your customers? Read “The good, bad ugly of YouTube Marketing”. Instead, upgrade to use our Intelligent Video Player on your website, Facebook and emails as receive sales Report. Does YouTube send you sales report.